Borrowed from the Library

Does Your House Have Lions? is a small collection of micro poetry and haiku. The collection is centered on the theme if family and loss. The little snippets are built as minimal as possible. Sonia Sanchez is known for writing in traditional Japanese poetry forms.  I don’t really have much to say about this collection other than the fact that it’s about the self-discovery and loss of an African American family. A father who isn’t always present, a son discovering that he’s gay and exploring that in the AIDS epidemic, and a sister and mother who are caught in between all of the heaviest conflicts of that time, the racism and the fluctuating changes of a generation. And then there’s death and the loss, at the end there’s this really poignant scene where the son connects with his ancestors after death. So there’s a sort magical realist influence going on here and I honestly wished it was a little longer. 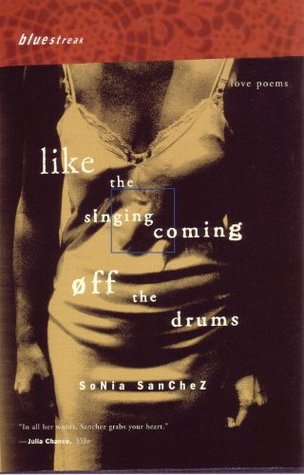 Borrowed from the Library

When I discovered Sonia Sanchez in the library I was really excited and this was the first one I wanted to read. But my break between classes is only an hour and a half long, so I decided to choose Does Your House Have Lions? because it’s shorter. But then after getting familiar with her style, I picked this one up. I enjoyed this one more than Does Your House Have Lions?, it’s less abstract and more lighthearted. It’s a self-healing type of a book, an ode to Black women and our culture. They are love songs, obviously. And because haiku and tanka are written with a certain amount of syllables, there is a very subtle rhythm and beat to it. And to be honest, I don’t really know how to read haiku or tanka, so maybe I should find a video of her readings. And I have to say, that I really like Sonia Sanchez, I can’t explain it, but I’m not a huge fan of a East Asian poetry forms, but she does it right. Every single person that writes haiku or tanka these days are pretentious White hipsters who write shallow love songs seasoned with cigarette smoke, coffee, and The Smiths. Of course, I’m not generalizing every one of them, this is just what I’ve seen so far in my life span. Sanchez isn’t like that, instead she has the soul. And it sure does come off strong with a powerful rhythm in this 144 page song.

P.S. I’m not bashing The Smiths, I actually kind of like them, despite Morrissey being a racist tea bag.