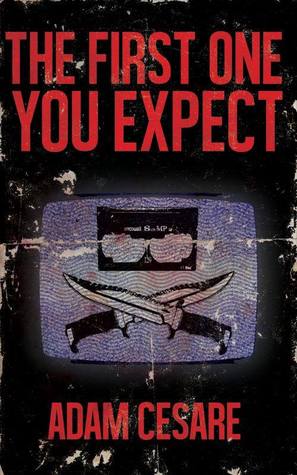 Towards the end of Halloween, I wanted to read something that would fit the mood. I have a bunch of unread Anderson Prunty novels and there was a new C.V. Hunt novel out. I sighed to myself and instead tapped on this novella. I was somehow burned out on Anderson Prunty after reading Creep House and I just didn’t want to add a brand new book to my ever growing TBR, despite that I love Hunt’s work. And the truest thing that J. David Osborne, who runs Broken River Books, has ever said in a blog post or some other social media post I don’t remember where I read it, was that when people obtain or download a book for free, most likely they’re not going to read it right away or they might not read it at all. But I managed to get into this one though and for its length and content, in the spirit of Halloween, it’s totally worth $2.99.

Cesare is known for his horror genre novels, well, I think that’s what he mainly writes. I looked through his repertoire on Goodreads and found a exploitation genre novel much in the spirit of those cannibal exploitation films from the Italians to the recent Eli Roth. And well this one, is kind of sort of the same thing, but on a low budget scale. It’s more like a snuff film actually.

The narrator, who’s name escapes me, is an indie film maker who makes smutty and gore filled internet films that the weirdos out there enjoy. Then he meets a girl who verges onto a sort of manic pixie dream girl. she’s the girl he’s always dreamed of, beautiful, fame hungry and she’s got the sadistic streak he does. So what happens is that together they make a film with a longtime friend named Burt and his horror dream girl gets a little bit too into character. So no more Burt and the narrator is slowly getting famous off his snuff video.

It’s about ambition and being careful for what you wish for. Ever since the main dude’s manic pixie girl committed her atrocity, they begin to feel on edge and their relationships dwindles, but most people didn’t seem to separate the real blood from the watery ketchup at first. And then you question, who’s the real actual sadistic killer in this novella?

The First One You Expect is interesting because you get to read about the underlings of horror films. The ones who can’t afford the high tech supplies but yet still have the brains to make a decent horror out of home made scratch. It’s a tribute to the underground peasants of art. But it’s also a satire in a way, the novella’s got a cheap, campy feel to it. Much like what the main dude directs. It’s got the noir elements, but there isn’t much suspense since you know just from the title and the first chapter. But this would make a great indie film for the festivals. I kind of also got a “failed artist” feel from this novella. The novella is a crime novel, a noir, and a self-deprecating literary novel about a loser artist. It’s kind of like a cut-throat drama and a satirical prod to the underground artists who are just frothing at the corners of their lips to be recognized.