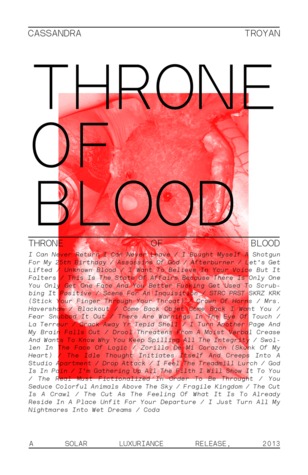 Now, that I’m finally loving poetry, I decided to pick this chapbook up. When I downloaded it months ago, Solar Luxuriance provides free downloads of their out-of-print chapbooks, I kept giving it up and picking up something else. The first “chapter” is actually a short story written in poetry. Is there a name for ‘Short story poetry’? I guess it would be narrative poetry. Anyway, that was one of the best parts of the chapbook, not only because I rarely find that style of poetry, but it is my favorite kind of poetry because it’s short stories, but not actually a short story. It tells the story of these two male necrophiliacs that murder women and girls and bury them in the basement. A lot of her poetry kind of has this feminist undertone to it, where she mourns the death and mistreatment of women and girls by the hands of men. It’s feminist because most people don’t take the mistreatment of women seriously. If you don’t believe me, well listen to how many people make jokes about rape and blaming rape on rape victims. But yeah.

Then after that, there’s some more poetry similar to do that, except girls don’t die physically, they die on the inside. I think these might’ve been slightly autobiographical. Where father’s disappoint and men kill women mentally repeatably for feeling too much.

This chapbook was actually fairly popular in the small press world so I feel like my review is basically going to repeat the same thing. Of course most of this chapbook isn’t too dark, some of it is light hearted somewhat. A care free feminist chapbook about being a woman who owns her sexuality, disappointment in relationships, self-hatred and inability to cope with it, and  existential angst. Topic wise, it’s not much different than your usual poetry book in the Alt. Lit world. But Troyan’s biting and vivid poetry stands out from the Tao Lin esque poetry writing I usually see to the point where it’s unavoidable. (Not knocking him, just saying that there’s way too many people writing like him now, with slight differences, but not very much the same.)

(I tried my best to remove the black parts so it could blend in.)

Well this one is short and sweet and it talks about loneliness and isolation, about awkward and unfulfilling relationships, and then it switches back and forth to the Gold Rush era when people left their homes and died on the way. The prose is filling for a novella, this is one of the shortest novellas I’ve ever read, I almost consider it a novelette, and yet it was written good enough to feel emotionally involving. I would like to read more of her works. Don’t have much to say since it’s so short. 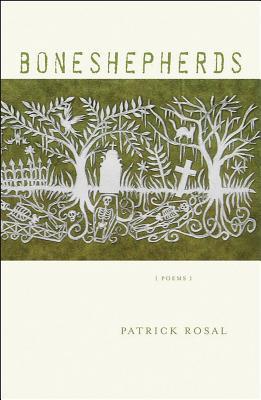 I’m kind of mad at myself for not reading this sooner. But by the time I got this, bought and signed by him, I kind of steamed myself out of poetry. And also because during that time I didn’t read as much poetry as I do now. Now that I do, I feel mad at myself for not buying and supporting more poets. Now I can’t get enough of it, especially since a lot of them, in my opinion are small/light reads, and are just as emotionally stimulating than your average novel, at least for me these days. And of course I don’t have a lot poetry books, so I read literary zines instead.

“The way, in death, one becomes

all the sounds one cannot make-

The sum total of everything

we have to sing just to figure out

what we cannot say.”

Based on my vague memory, I read it a long time ago, this collection is totally different from American Kundiman, which was released five years before this came out. And this collection was released four years ago. So there’s a lot of change from AK to Boneshepards, which is a lot more story focused, sort of bittersweet, and feels a lot like reminiscing of the past, which I assume is most poetry, however this is a lot softer. The musicality of his poetry has become ballads or soft jazz piano in this collection, instead of the hip-hop of American Kundiman. It’s sentimental, personal, self-reflective, it just feels so much closer, delicate and sensitive, wary of the fact that the hardness is thawing out a bit. Of course, like his previous collection there are still some poems with violence, bloodshed, and dysfunction, but this one had a light ambiance.

“I know this much. There is a man in Puerto Plata who can tell me

everything I need to know about the history of France

in a language his great grandfathers made up. I’ve come back

to live in someone else’s house in the richest country

in the universe. None of us belongs anywhere

without love. Everything has began to die.

Some of us keep shouting your name.”

Maybe because I read it in my mother’s room where it was quiet with a faint white light? Maybe, I was just super ready to read this? It’s also more nostalgic, with some pondering of those who are dead or have died in some other form that doesn’t involve bloodshed. Nostalgia is a heavy theme in poetry, nostalgia is the reason why we tell stories, fictional or not.

It’s about dying as in leaving and never seeing you again and remembering as in reminiscing and mourning the fact that you won’t experience it once again.

they let all the languages of their world pass

through them, as if that were a way

of moving on, and the one word always

poised upon their tongue is goodbye.” 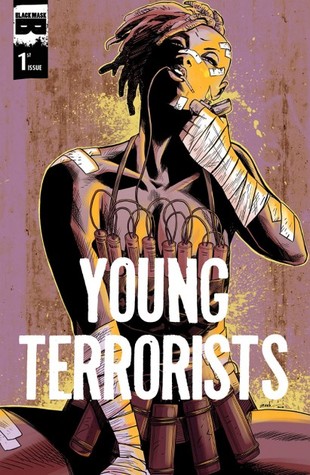 This was received from Netgalley for an honest review

This is a pretty short graphic novel, 80 pages is a little unusual for a graphic novel. It’s not short enough to be considered a novella, according to what the author wrote in the last few pages. Since it’s short, my opinion or review will be too. The story takes a pretty long time to form, you don’t really get what’s happening until the last few pages. There’s two perspectives, the one on the cover is one of the main characters and her father dies, then there’s some explosion, the principal finds weapons of mass destruction her locker, she gets arrested, and is  released years later as a buff and scarred up warrior. Then the second perspective is some guy who’s poor and abandoned somewhere and for a reason I can’t remember, he blows a restaurant up, and gets captured by one of the main character’s buddies. Judging by the name of the graphic novel and what I’ve read, it seems to take place in a dystopian world where the two main characters have to fight and use violence to show their displeasure towards a government they want to destroy. Capitalism is bad, blow everyone up. Seriously.

This graphic novel was honestly kind of forgettable. The plot took too long to build up, I understand that this is a series so it’s expected, but come on really? It’s so vague. All I can remember is some flesh being torn and some gore. it’s also a bizarre Sci-Fi filled with sex and nudity. The main character who is the girl on the cover literally did a Mike Tyson in one of her fighting matches, and she swallowed the flesh, because “That’s so brutal.” I was also disappointed to find this main character wasn’t a Woman of Color or specifically a Black woman. I know I don’t have the best vision, but I saw the dreads, and I was like “Wow, support comics with Black women as main characters, representation for all the Blerds!” But it turned out she’s just your typical White or racially ambiguous, most likely White, main character, and she just has “dreads,” because she doesn’t comb her hair… And of course the only Black dude in this comic, one of her buddies that kidnapped one of the main characters, is hyper-masculine to the point where he’s the quiet tough guy that will tear you to shreds, a killing machine. Completely dehumanizing.

But yet, I’m still somewhat interested to read the rest of the series, because it does have some promise, it’s unfair to judge a whole series on 80 pages.

Received for an honest review

I’m never happy with any blog platform am I? I can’t even explain it right now, but let’s say the text box looks really small.

Ah, yes, I have been falling in and out of the bizarro genre lately. There are times when I can’t get enough of it and there are times where I literally just can’t stand it. Like most genre fiction or fiction in general, I do tend to find things to be too overdone or repetitive or just doesn’t speak to me anymore for the same reason I just stated. And I’m also still a bit new to bizarro so maybe I just need to try out more of the sub-genres of bizarro, other than the horror part. I like it enough not to give it up as a whole.

As you can see from the cover this is a book about a teddy bear that is hot headed and I don’t know what it is, I assume this is part of the noir genre’s formula, he’s also super racist, misogynistic, and is not afraid to bash your skull in. Carrying the ingredients of “Loser detective noir” and the flawed character with a debilitating hamartia that made him into a teddy bear in the first place, Jimmy Plush is typical noir with a wacky bizarro twist that takes place in a Dystopian world that takes place in an underground criminal Chinatown from the early 1900s, I believe it was the 20s, with a steampunk influence. It’s a short story collection consisting of stories of Jimmy Plush solving mysteries, kicking people’s butts, and lots of bizarre stuff that reminds me of some of the wacky cartoons I grew up watching, but matured to the X-rating.

I gotta admit, despite the racism, this story collection is definitely my favorite of the year. It’s funny and filled with vibrant wacky characters and a nasty sarcastic prose. The furry peoples are honestly the most hilarious thing, because of course with the popularity of the horror game series, Five Nights At Freddy’s, I can’t help but imagine all of that quirky stuff. Some of the furry people were violent killers and committing crimes, and then there’s Jimmy Plush, beating up bad guys and ripping their names off their very flesh. It’s nostalgic, reminding me of vintage Sci-Fi, a few of the short stories have elements of Twilight Zone and alien lasers, etc, and noir paperbacks that I didn’t grow up with but when I got into the noir genre, I began to understand the appeal.

With the heavy bizarro and satire influence along with all the silliness in there, there’s something rather personal. It was quite clever to use the harmless innocent body of a teddy bear to write about self-acceptance and self-hatred. When you lose all your tools of survival and everything that makes you what you are,  you don’t necessarily end, you are reborn, sometimes better, sometimes worse. But to embrace that and become whole is better than being in constant shambles and whining about it.

Notes on the shore
Create a free website or blog at WordPress.com.