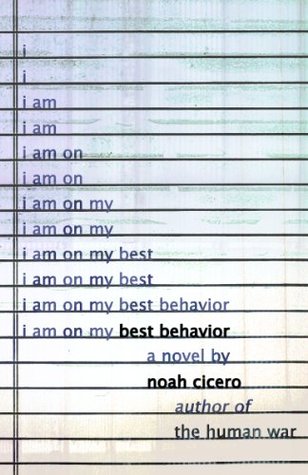 Pages: 169
Genre: Existential, Transgressive Literature? (Apparently it’s in the comedy section, it is a bit funny though)
Format: E-book

I feel like this review will piss people off. I didn’t really love this, I liked it, but I just couldn’t wait to finish it. Noah Cicero was introduced to me through the Other People podcast and I really enjoyed that episode.

So what I did like about this novel, well it’s pretty much what the narrator wanted to do. The novel that defines a generation. The generation of young people who are jobless, lonely, obsessed with drinking and drugs, and kind of just depressed about their dreams that they’ve fought so hard to achieve. So yeah this book is obviously not a happy one. It takes place in two areas, the depressing Youngstown, where people seem to accept their misfortune and New York, where everything seems so happy but it’s all a facade. It’s all about being unhappy with what you have and never being happy with whatever you get.

Everyone seems so satisfied with their filled wallets and the temporary spots of fame that will later be forgotten in a few years. Struggling writers that work for the art but feel like life is pointless, they secretly desire fame, but feel that it will corrupt it. Men and women search for each other, most of the time their drunk, but out of loneliness, they look for their presence and their attention. However, they push away later, because everything is just pointless in life. The numbing feeling of boredom and isolation.

The book is pretty similar to Tao Lin, but the writing style is similar to the minamalistic prose, maybe a morph of Tao Lin and Haruki Murakami. I might be horribly wrong, but I’m writing this review two or three days after I finished it. So the thoughts I  had for this book are slowly running away from my grasp. I have read Tao Lin before and he is definitely an influence, but I feel like Noah’s writing is more like the Thinker, the guy that constantly thinks of the politics and the societal ideas that seems to be the mechanic behind everything in our lives.

I liked it but there were some things that bothered me. Noah kind of has a weird obsession with Asian girls and the main character sees them all as cute, little, sexy girls to the point of objectification, especially when it came to the sex scenes. It kind of annoyed me, That was really the only thing that bothered me, the Asian fetish thing going on.  I am of mixed race, I have a Latino and African American mother (she’s biracial) and a Chinese father. Like me, some of the female characters in the novel are also mixed with Asian. There “Asianness” was so objectified to the point where there were just there for the main character to have sex with and be depressed with.


Despite that annoyance, the novel was fairly comedic, yet intelligent. Some political things thrown in with satire and drunk comedy. Most of the novel was pretty fun to read, some parts were so achingly dreary. Unfortunately reality is pretty damn sad. I guess I started off with the wrong Noah Cicero novel, I will be reading more of his work. I just had mixed feelings for this one.